The Video Scopes module offers a small suite of video measurement tools. It offers a Waveform Monitor, a Vector scope, an Histogram and a YUV/RGB parade.

The Waveform Monitor is an industry standard video calibration instrument used to measure the video luminance and chroma components in a color image or a video signal. Video can be represented in digital data or an analog signal form.

The Vector scope is a video tool used to see the Hue and Saturation levels of a color image source. It is a great tool for indicating white balance of an input image, as shifts in hue are readily shown when offset from the white and black center of the scope. The chrominance component of an image can be isolated when converting the RGB color space to YCrCb and only using the CrCb component and calculating the necessary vector (angle and magnitude) from the colour data. RGB data can be sourced from a file or from an array of data which is user selectable.

The RGB parade is a tool used to see the individual RGB color values and intensities in an image. It can display the data in Percent, IRE and RGB. The user can set the tool to only show RGB (Tri-mode) or show luminance and RGB (Quad-Mode).

The YUV parade is a tool used to see the luminance and chrominance values in an image. It can display the data in Percent, IRE and RGB. 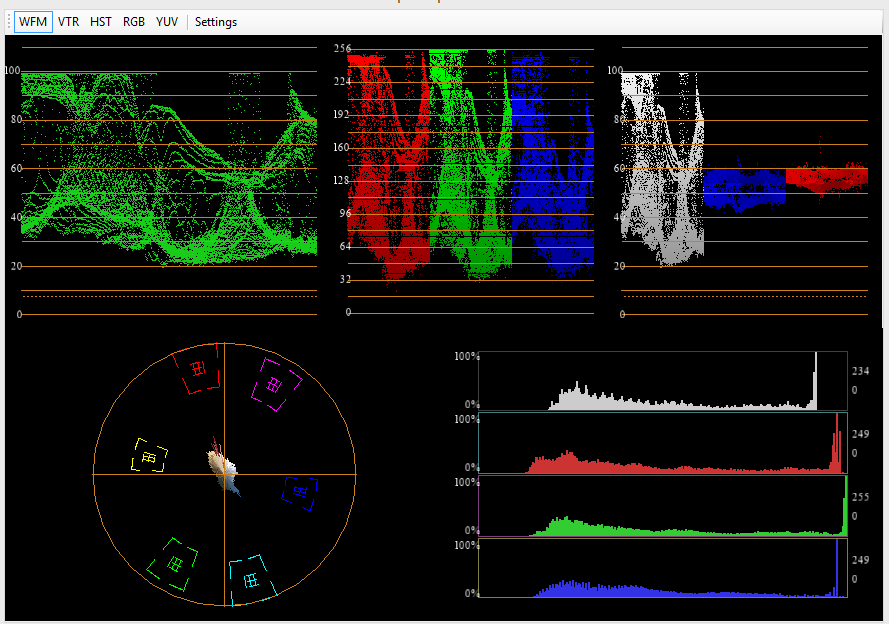